Throwing food scraps to hogs and other farm animals is an age-old practice. As food production has become more industrialized, food factories have found ways to continue to recycle massive amounts of would-be food waste.

Their motives aren't purely environmental; keeping the scraps out of the landfill makes more money for food manufacturers and saves cash for farmers.

This kind of food recycling doesn't include what's been on your plate or produce that doesn't get sold at grocery stores – that kind of food waste isn't consistent or steady, so it's generally not reliable enough for large-scale farms. But every factory that makes food – be it tomato sauce, oatmeal, cereals, pasta, cinnamon toast – has some kind of waste.

Often, more than 50 percent of livestock feed is made up of some kind of recycled material, said Iowa State University animal scientist Mike Persia.

"Animal agriculture is one of the leaders in the green revolution, even though they have never touted that," Persia said.

Persia said one common example is the oil waste product from making soybean oil, the number one product made from soybeans. The oil that is below human-grade gets added to livestock feed to fill the fat quotient of their diet.

Often, the livestock industry makes use of the little things that you might not think of, but they really add up. Like, where do all those tomato seeds go after they're removed in the making canned tomatoes?

"I've done research evaluating tomato seeds, waste products of the tomato canning industry, in poultry rations," Persia said. "So that's certainly, both from the poultry and dairy perspective, something that can occur."

With today's fairly high corn and grain prices, farmers’ savings from incorporating cast-off vegetable trimmings and doughnuts can be significant.

Jeff Clausen manages 3,000 cattle in two feedlots outside of Omaha, Neb. He says the majority of his cattle's feed is bakery byproduct – bread, dough and pastries that get burned or misformulated.

"When corn is $2, it's not as big of an advantage to feed it, but when corn is $6 or $7 then everybody is looking for ways to get corn out of rations," Clausen said.

The product isn't cheap, but he said it's usually about 70 or 80 percent of the price of corn.

Clausen buys about 150 to 200 tons of bakery leftovers a week directly from large bakeries and it makes up as much as half of the 100,000 pounds of feed he mixes daily. He didn't feel comfortable, though, sharing where he purchased his dough-ey cast-offs.

"I'm a little bit sensitive about that because it's pretty competitive, not only between feedlots but also dog food companies in Omaha – they’re kind of our competition," Clausen said.

Clausen also buys soybean pods, which he says makes up about 30 to 40 percent of his cattle feed. After the beans are removed to make human food, the pods would otherwise be composted, but cattle can eat the roughage.

The market for food production cast-offs is big enough that middlemen have started to get in the business of getting the food waste to livestock producers.

Take the Quaker Oats plant in Cedar Rapids, Iowa. They sell oat hulls, flaked-off oat fibers and cereal seconds to both third party companies and farmers, according to Tom Metelman, senior director of the plant.

"Over the last few years, we've renegotiated a lot of our contracts to be a certain percentage of corn or oat market for example, so as the market moves, the value of our byproduct moves as well," Metelman said.

That means when corn prices go up, so does the price for those misformulated batches of oatmeal, Captain Crunch and Life cereals.

Metelman says that less than 1 percent of the Quaker Oats plant's waste product goes to a landfill. For example, the hull makes up about 30 percent of an oat and isn't fit for human consumption, so Quaker Oats sells it for animal bedding or to be burned as biomass to make energy.

They can even sell the tiny oat fibers that flake off in processing. They’re gathered and sold to be added to livestock feed.

Cows and pigs munching on cereals and oat flakes doesn't seem too far-fetched, but there are other food byproducts that make their way into animal feed, too. Even candy manufacturers have seconds. For example, the Hershey Company sells their candy that isn't up to snuff for humans to the ag company Cargill, for use in livestock feed.

"The (wrapped) product is put into a grinder and then into a hammer mill and it's broken up into a very fine consistency,  a little bit bigger than dust. The hammer mill uses a vacuum to pull out the paper ," said communications director Jeff Beckman. "The only product that couldn't go into the grinder is our Twizzlers candy, because of the gummy texture. So, product is sold directly to the farmers unprocessed, which they feed to cattle."

Beyond carbs and calories, there's another large source of food waste: meat processing. Everything that isn't consumed by humans or doesn't go into pharmaceuticals  or pet food gets rendered. It's all processed at the packing plant, where the waste parts are funneled into a giant vat.

"Basically that process is like a large pressure cooker. It uses high temperature and high steam to degrade bones, degrade the tissue, any residual meat, any fat," said Persia.

It's then separated into two streams:  meat, blood and bone meal, and fat. These steamed cast-offs are then added back into livestock feed. Federal rules, though, do bar cows from eating cows, because of the risk of mad cow disease.

What any individual farmer or company uses in their feed is partly based on their location and what's available. Most develop specific formulas with their vet or animal nutritionist to get the right balance of nutrients.

Some estimate that this kind of repurposing saves thousands of tons from going into landfills every year. And that's not to mention the money what it can save farmers, especially in the days of sky-high corn. 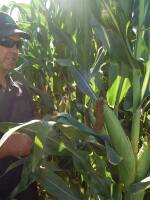 Kathleen Masterson
Kathleen Masterson was Harvest Public Media’s reporter based at Iowa Public Radio in Ames, Iowa. At Bowdoin College in Maine, Kathleen studied English and Environmental Studies and was torn as to which one she’d have to “choose” when finding a job. She taught high school English for a few years, and then swung back to science when she traveled to rural Argentina to work on a bird research project. She returned home to study science journalism at the University of Wisconsin-Madison. After graduate school she went on to work as digital producer for NPR’s science desk before joining Harvest.
See stories by Kathleen Masterson
Latest Stories
Support news that matters in Kansas City
KCUR serves the Kansas City region with breaking news and powerful storytelling.
Your donation helps make non-profit journalism available for everyone.
Donate Now
Related Content