Arts & Life
Hungry For MO
Hungry For MO is a podcast from KCUR Studios where hosts Natasha Bailey and Jenny Vergara celebrate the stories behind Missouri’s iconic foods, from barbecue to pizza and beyond. Supported by the Missouri Humanities Council.

Black walnuts don't get as much love as non-native nuts. These Missourians want to change that

Missouri is home to more black walnut trees than any other place in the world. Its wild nature and distinct flavor means the black walnut often gets passed over for more popular European varieties — the kinds you normally see in grocery stores and restaurants. But these Missourians are making sure that the state’s native nut, and its importance to the culture of this region, gets its day in the sun.

For more stories like this one, subscribe to Hungry For MO on Apple Podcasts, Spotify or Stitcher.

For over six decades, the town of Stockton, Missouri, has held an unusual celebration every fall: The Black Walnut Festival.

With a parade, a “Nut Run 5K,” and the crowning of a Black Walnut Queen, Stockton pays tribute to a nut that, in many ways, defines this town.

Hammons would know: He’s the president of Hammons Black Walnuts here in Stockton, which collects in the ballpark of 20 million pounds of black walnuts every year — the biggest operation of its kind, anywhere.

“Community is a big part of what we do,” Hammons says. “It's a pretty part of what rural Missouri is about, too.”

English walnuts are considered an “Old World” species, native to the Balkans and stretching into southwest China. With a milder flavor and a thinner shell, they’re what most people typically think of when you say “walnut” — the kind you might enjoy in brownies or salads.

But while English walnuts are mostly commonly cultivated in orchards, in places like California, black walnuts are from here. The eastern black walnut tree grows wild in Missouri and 31 other states, and its nuts are known for their distinctive taste: Earthy, musty, bittersweet.

While black walnuts are not as widespread as their European cousin, there’s a long history of them being used by Native tribes and early homesteaders in this region — as a valuable food source and medicine for both humans and animals, and as tea and dye.

Even the nut’s shells are valuable. When ground up, they can be used as an abrasive for cleaning and polishing, as a way to filter crude oil from water, or in soaps, cosmetics and cleaners.

“There's more protein in black walnuts than any other tree nuts,” Hammons says. “And there are good fats. There are all the wonderful features of how healthy nuts are generally. And then black walnuts have even more, particularly the protein aspect. If you mix that with other superfoods like blueberries, dark chocolate, they can be just absolutely wonderful.”

“As a kid, yes, we always, if you went to grandma's house for Sunday dinner or anything, you would either be charged with picking up black walnuts out of the yard, and then if you sit down anywhere, you're gonna get to crack black walnuts,” Amerman says.

Amerman now works as a forester with the Missouri Department of Conservation. Her work mostly has to do with the highly-desired hardwood of the eastern black walnut tree, whose rich coloring and strength makes it a valuable natural resource and a favorite among woodworkers, used for everything from gun stocks and cabinets.

“This tree knows it wants to be hardy or a player into the future,” she says.

The eastern black walnut has a unique defense mechanism: It produces a chemical called juglone, which prevents certain plants from growing near or around them — and competing for resources. It’s a natural defense that gives the tree a better chance to reproduce and thrive.

“When the walnuts hit the ground, they have the potential to reproduce and start new seedlings,” Amerman says. “So that’s really kind of phenomenal.”

That doesn’t mean the black walnut tree is totally protected. A disease called Thousand Cankers has been killing off the species in parts of the east coast. Thanks to successful quarantines, it’s not yet spread to Missouri, but foresters and businesses aren’t letting their guard down.

Despite the economic and cultural significance of black walnuts, Amerman says Missourians have mostly forgotten about their native nut.

“People probably take for granted that you can go to the store these days and you know, buy a bag of walnuts or black walnut and come home and be able to bake or make Christmas candy or cookies with it,” she says. “I just don't know that the next generation will maybe be able to cherish, or know exactly how much it took to be able to have a half pound of walnuts that's in your cabinet, to bake with or put on your ice cream or do whatever.”

Hammons has become one of the nut’s biggest cheerleaders. For him, the future of the black walnut couldn’t be more important.

“There’s not another business like it in the world,” he says.

Hammons’ grandfather, Ralph Hammons, began the company in 1946 with a nut cracking machine acquired from Tennessee.

“He looked around, decided, ‘Hey there’s a natural crop of black walnuts that happens every year, and there might be an opportunity here to put together a little business,’” Hammons recalls.

The walnuts come to Hammons Black Walnuts in much the same way they’ve always been harvested in this region: From the wild, by hand.

“People pick them up in yards and fields, pastures where they’re growing and they sell them,” Hammons says. “They find that that’s a raw resource, a natural gift of God every year.”

Those walnuts get dropped off at one of the nearly 200 hulling stations that Hammons operates across the Midwest, where walnut collectors can get paid by the pound for what they bring in.

Hammons is trying to educate more people about black walnuts and how to incorporate them into everyday cuisine. On the company’s website, they post recipes like black walnut brittle, and black walnut, zucchini and carrot latkes.

“It's still a small industry, but I think there's some niche opportunities there,” Hammons says. “Chefs are really starting to discover black walnuts and how good they can be, both in sauces, but also as an addition in a lot of baked goods and recipes from salads to vegetables.”

“I grew up in the Ozarks and that's how I made my spending money as a kid, you know, you go out and you pick up the black walnuts and you take 'em to a hulling station and they cut you a check and you, you got a little bit of pocket change for a bit,” Durham says.

Piney River Brewing is located in Bucyrus, Missouri, and its selection is all about celebrating the Ozark region and native ingredients. In 2011, they brewed a Black Walnut Wheat Ale for a beerfest, and liked it so much that they started canning and kegging it a year later.

“I always encourage them to give it a try because the way that the black walnuts come through in the beer, it’s not as stringent, it has a very nice pleasant flavor as well as aroma, and it can be surprising to people,” Durham says.

It’s since become their signature beer — with the main ingredient sourced, of course, from Hammons Black Walnuts.

“Everything that we've done, we really tried to make that connection between the history of this place and the things that may be really unique to the Ozarks,” Durham says.

At the Stockton Black Walnut Festival, attendees had their own favorite ways of consuming black walnuts. Forager Jesse Zitting will eat them raw, or in a black walnut latte, while Bob Creus throws them in with pancakes or ice cream.

Over 70 years and four generations into the black walnut business, Hammons says they’re still uncertain about whether this heritage will continue.

“Question marks are, will people pick up the wild nuts in the future?” he asks. “And will people continue to buy and enjoy that bold, distinctive flavor of black walnuts? It is more expensive because of that wild nature, and it has a much lower yield than cultivated out of California.”

Durham hopes so. She says there’s a deep value in going out into nature and foraging in the way that Missourians and Native communities have been doing for centuries.

“The one thing that I would encourage everybody to do a little bit of, even if it’s just a couple of bags or buckets, go out and pick a few walnuts,” Durham says.

Hungry For MO is a production of KCUR Studios, with support from the Missouri Humanities Council. It’s hosted by Natasha Bailey and Jenny Vergara. This episode was written and produced by Suzanne Hogan with editing from Gabe Rosenberg and Mackenzie Martin. Sound design and mix by Suzanne Hogan and intern Zacchary Rodgers. Music this episode from Blue Dot Sessions.

Special thanks this episode to reporter Bek-Shackelford-Nwanganga for additional reporting from Stockton, Missouri. 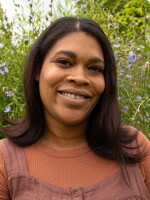 Suzanne Hogan
Every part of the present has been shaped by actions that took place in the past, but too often that context is left out. As a community storyteller taking a new look at local history, I aim to provide that context, clarity, empathy and deeper, nuanced perspectives on how the events and people in the past have shaped our community today. I want to entertain, inform, make you think, expose something new and cultivate a deeper shared human connection about how the passage of time affects us all. Reach me at hogansm@kcur.org.
See stories by Suzanne Hogan
Hungry For MO returns!
KCUR's podcast Hungry For MO is back with more stories about Missouri’s iconic foods, from barbecue to pizza and beyond.
Subscribe now
Latest Stories
Support news that matters in Kansas City
KCUR serves the Kansas City region with breaking news and powerful storytelling.
Your donation helps make nonprofit journalism available for everyone.
Donate Now
Related Content