Lotus Care House is taking a different approach to counter the homeless crisis. Unique support services like their path to housing and medical recovery programs help navigate the homeless from the street to permanent housing.

After David Nelson lost his home in 2021 because of rising rent, he spent about a year sleeping in parking lots, while holding down his job as a truck driver.

“I was living in my car at Cracker Barrel,” Nelson said. “I slept in my car because of COVID. The doctor said that's what caused me to get this infection, from being in the car every day.”

Five surgeries later and still homeless, Nelson’s medical complications kept him hospitalized for months, and partially disabled ever since.

Since most local shelters can’t accommodate his health needs, Nelson couldn't access the already limited services offered to homeless people in the area.

Nelson found sanctuary through a chance encounter with a nurse who told him about Lotus Care House, Kansas City’s only housing-first shelter for people experiencing homelessness.

Since opening at the corner of 31st Street and Linwood Avenue in 2021, it’s become a bridge to stability for some of the city’s most vulnerable residents.

Nelson has been here since August.

From Sleeping In Parking Lots to Having Room Keys

Many people in the metro struggle to find safe housing because of a health or substance abuse issue. Most shelters require that residents stay sober, and many don’t allow couples. Others encourage residents to adopt certain religious beliefs or practices.

Lotus Care House Director of Programs Jonathan Reavis thinks all those requirements need to change, or be eliminated completely.

“Our goal is to provide low barriers to really put housing first and to provide for people based on their need and their inherent dignity,” said Reavis, “and really meeting people where they're at, and trying to get them where they want to go.”

That means developing individualized housing plans for every guest, so they have a path to permanent housing, and dealing productively with the inevitable hurdles, like addiction and mental health issues.

Reavis believes their system helps build trust. For people dealing with the trauma and violence homelessness can bring, the difference between traditional homeless shelters and Lotus Care House is huge.

Lotus Care House also partners with community groups like Save, Inc., which specializes in helping people with HIV and AIDS, and Care Beyond The Boulevard, a free, mobile medical clinic that goes far beyond providing basic necessities like toothbrushes and floss.

Recovering from a serious injury or major surgery while experiencing homelessness is incredibly difficult.

“Care Beyond the Boulevard has five beds with us that they utilize and they get referrals from the hospitals,” Reavis said. “They bring them our way, and they stay here. They provide all the medical services, and we try to connect people with housing while they're here.”

Jamal Collier admits that, before he found Lotus Care House, he had kind of given up on life.

Collier became homeless early in the COVID-19 pandemic, after he lost his job and car. After Lotus Care House staff embraced his love of music as a way to connect, he went from transient to full-time employee by the end of 2021. He knows his fate could have been much worse.

Now, his room in the converted, 1970s hotel doubles as a small studio where he makes beats and records songs. Collier, now guest liaison at Lotus Care House, says it’s a creative teaching tool he hopes will help other guests regain the stability he now cherishes.

That approach to care shows up in other Lotus Care House efforts, too. The nonprofit wants to set up a community garden in the future, and a technology center for their guests.

They’re seemingly simple services that go a long way toward establishing the normalcy so many of their guests lack. 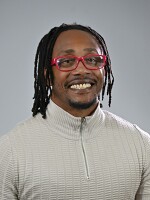