Most recently, the Lenexa, Kansas-based humanitarian aid organization sent $15 million in medical supplies to a warehouse in Slovakia, where a local organization will deliver it across the border to Ukraine.

To help the people of Ukraine with medical aid, Heart to Heart International, a humanitarian aid organization based in Lenexa, Kansas, has partnered with an organization in Slovakia to deliver $15 million worth of medical supplies.

The shipment includes medicines, medical supplies, hygiene kits and blankets. After its arrival at a warehouse in Slovakia, where they will be packaged and distributed to facilities in need through a network of trucks that can bring them to Ukraine.

In addition to the $15 million worth of relief supplies, the shipment includes three 20-foot containers donated by Worksite Labs — one serves as a mobile diagnostic laboratory and the other two are portable clinics containing medical supplies, 4,800 meals and 3,600 hygiene kits.

Dan Neal, vice president of operations for Heart to Heart, told KCUR’s Up to Date in an interview from Slovakia that he and his colleagues had been in Uzhhorod, a city in western Ukraine just across the border with Slovakia, to visit the warehouse, see the distribution system and meet their Ukrainian counterparts.

"I was nervous," Neal said. “We were meeting with some colleagues in a restaurant in Uzhhorod when the air raid sirens went off and the restaurant owners told us to go to the basement. There we spent the next 90 minutes in the basement of the restaurant.”

No rockets or bombs fell, however, and they got the all-clear and were able to go back upstairs and finish their meeting.

“It was an interesting experience that I had never been a part of or thought I would ever be a part of,” Neal said.

Heart to Heart has been working since the beginning of the Ukraine crisis to provide hygiene kits, medicines, medical supplies and blankets to number of organizations in Ukraine.

So far, the organization has sent about $34 million — or 200 pallets — worth of products.

Neal said the needs of the Ukrainians are “complex.”

Five different scenarios are taking place at the same time, he explained.

In eastern and southern Ukraine, where the fighting is taking place, there is a need for medical care.

In the area around Kiev and in the northeastern part of the country, which was occupied by Russia and is now liberated, the Russian occupiers had destroyed health care infrastructure and equipment. "There are doctors and nurses, but they have no equipment to work with," Neal said.

In southern Ukraine, which is not yet occupied, people in places like Odesa are preparing for the occupation in many ways, stockpiling medicines in case it comes.

And the area in Uzhhorod, which has seen a massive influx of people fleeing eastern Ukraine to western Ukraine, a city which is normally home to about 100,000 people now has a population of half a million. The increase in population poses a challenge to the health care system.

And the refugees who have fled to Poland, Slovakia and Romania have their own needs, which are different from those in other parts of Ukraine.

Neal noted that Heart to Heart’s international aid work began 30 years ago after the Chernobyl nuclear accident in what was then the Soviet Union and is now Ukraine. After some members of the Rotary Club of Olathe traveled to the area to see how they could help, they found a health care system that had well-trained doctors and nurses and had built medical infrastructures, but no medicines or medical supplies. They came back and started organizing, securing donations from what was then Ewing Kauffman’s Marion Laboratories and working with U.S. Sen. Bob Dole of Kansas to organize an Air Force cargo plane for delivery to Moscow.

“And it was from the heart of America to the heart of Russia. And that's where the name Heart to Heart came from,” Neal said. “And so then for the next 10 to 15 years, that's really what Heart to Heart did was provide medical aid into the states of the former Soviet Union — so places like Ukraine, Belarus, Moldova, these are all names you're hearing in the news recently. And so it's somewhat surreal to be back in this part of the world.”

Correction: An earlier version of this story said mobile clinics were donated by a Wichita company called called Clinic in a Can. The mobile labs were initially outfitted by Clinic in a Can for Worksite Labs, which donated the containers, meals and supplies. 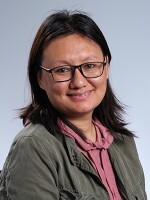 Chencho Dema
Chencho Dema is an Alfred Friendly Press Partners Reporting Fellow currently working with KCUR. She works with Business Bhutan, the only financial newspaper in the country of Bhutan. Follow her at @chenchodema1987.
See stories by Chencho Dema

Elizabeth Ruiz
Elizabeth Ruiz is a freelance producer for KCUR’s Up To Date. Contact her at elizabeth@kcur.org or on Twitter at @er_bentley_ruiz
See stories by Elizabeth Ruiz
Support for KCUR's Up To Date Comes From
Support news that matters in Kansas City
KCUR serves the Kansas City region with breaking news and powerful storytelling.
Your donation helps make nonprofit journalism available for everyone.
Donate Now
Related Content