In many districts across Kansas, tight budgets have put teachers and school boards at odds.

School boards are hedging their bets about how generous the state funding will be next year. That very much depends on who wins seats in the Legislature.

In Wichita, the state's largest district, it took much longer than usual to reach agreement on a contract for this year. It wasn't until October that teachers had a tentative deal with the school board.

At a meeting before the deal was struck, Steve Wentz, president of the Wichita teachers union, told the board just how tough it’s been.

“I gotta tell you, I am so tired of seeing your employees in tears,” Wentz said.

Similar scenes have been playing out at school board meetings across the state. In Shawnee Mission it took a federal mediator to break the impasse.

Wichita teachers are getting modest bonuses and small raises, but it's not everything they were asking for. The local union has been demanding change in the form of more pay and reduced workloads.

School board members say all the money teachers are asking for simply doesn’t exist.

“These are times that I haven’t lived in before, where every single year we’ve had to cut the budget by millions of dollars,” said Wichita School Board President Sheril Logan.

“I hope that Topeka changes and begins to realize the importance of teachers and schools and the future that those things provide because without you all, we’re nowhere,” she said, addressing teachers at the meeting where Wentz spoke out.

The state’s current block grant system is expiring. That means, next year state lawmakers will be writing a new school funding formula which will be guided by the Kansas Supreme Court’s rulings on what qualifies as an equitable and adequate education.

But, right now, out on the campaign trail there are two competing schools of thought about how to provide equitable and adequate education: spend more, or spend wiser.

Larry Alley, a Republican, is running for the Kansas Senate seat being vacated by the Senate education committee chairman in District 32. Alley is in the “spend wiser” camp.

Alley's opponent in the Senate race disagrees. Don Shimkus is a Democrat and the immediate past president of the Kansas Association of School Boards.

“They say more this year than last year, that’s just patently untrue,” Shimkus says describing the current amount of funding for public education. “For the past two years, we’ve been under a block grant system, which specified that the amount of money would stay the same both years.”

Shimkus is in the “spend more” camp. And in his mind, the bake sales for marching bands and sports teams that he hears about when he’s out knocking doors in the district south of Wichita are further proof that schools are underfunded.

“Fundraisers [are] being held here there and everywhere to make up for state funding that is not being sent to them,” Shimkus says.

Alley counters that if the measure of what’s needed for education is in dollars, there’s no telling what would ever be enough.

The Kansas Chamber of Commerce, which has endorsed Alley, says in data analysis produced with the Kansas Policy Institute that the state could be more efficient in achieving those outcomes, by consolidating costs outside the classroom.

“There’s a lot of things we could do, like health insurance. Instead of buying health insurance for one school, why don’t we do it for 10? We need to think about those things,” Alley says.

Alley says the savings could then be sent where they are most needed: the classroom.

“Give the teachers the tools they need to do their job in the classroom,” Alley says. “Some teachers are teaching with 15-year-old textbooks.”

One thing Alley and Shimkus seem to agree on is that Kansas teachers need a boost.

“Right now we have teachers who cannot make ends meet on their salary. I don’t think that’s right for the people that teach our kids,” Shimkus says.

It's to be determined where that support comes from, and whether it means money for teacher raises comes from cuts elsewhere.

It's to be determined by how many in the “spend wiser” camp or “spend more” camp end up in the Legislature.

That’s a tug of war that voters will decide.

Abigail Beckman is a reporter for KMUW, which is a partner in a statewide collaboration covering elections in Kansas this year. Follow Abigail on Twitter, @AbigailKMUW. 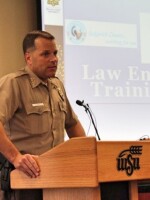 Abigail Wilson
Abigail Beckman joined the KMUW team in April 2014. Born and raised in a small Colorado mountain town, she is still getting used to being a flatlander.
See stories by Abigail Wilson
Hungry For MO returns!
KCUR's podcast Hungry For MO is back with more stories about Missouri’s iconic foods, from barbecue to pizza and beyond.
Subscribe now
Latest Stories
Support news that matters in Kansas City
KCUR serves the Kansas City region with breaking news and powerful storytelling.
Your donation helps make nonprofit journalism available for everyone.
Donate Now
Related Content