Jolie Justus has built her mayoral campaign around pragmatism and the idea that Kansas City needs a mayor to focus on issues like affordable housing and crime — and focus on growing the city's profile on the national stage.

And, as it turns out, she's also pretty darn good at throwing axes.

KCUR's Lisa Rodriguez went to Blade and Timber with Justus to chat about her time in the Missouri General Assembly, her four rescue dogs and a whole lot more.  Take a look here:

Lisa Rodriguez is the afternoon newscaster and covers Kansas City, Missouri, City Hall for KCUR 89.3. Follow her on Twitter @larodrig.

Lisa Rodriguez
Slow news days are a thing of the past. As KCUR’s news director, I want to cut through the noise, provide context to the headlines, and give you news you can use in your daily life – information that will empower you to make informed decisions about your neighborhood, your city and the region. Email me at lisa@kcur.org or follow me on Twitter @larodrig.
See stories by Lisa Rodriguez 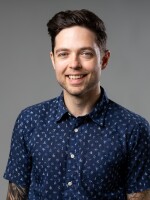