Anybody driving the Pacific Coast Highway in California can see a potential solution to the state's water problems. It's right next to the world's largest ocean. New facilities are being built in California for desalination, to make the ocean's saltwater drinkable. But environmentalists are worrying that could do more harm than good. From member station KQED in San Francisco, Daniel Potter reports.

DANIEL POTTER, BYLINE: What will be the biggest desalination plant in the country is set to come online this fall, producing around 7 percent of San Diego County's water. That's at a cost of roughly a billion dollars. Another plant that sat idle for a generation could soon meet 30 percent of Santa Barbara's demand for water.

MAYOR JASON BURNETT: I'll say at the outset, I am not a fan of desal generally.

POTTER: Mayor Jason Burnett says the Carmel River has been the area's main source of drinking water for decades. Plans to switch to desalination might seem to put the area on the cutting edge. But Burnett is far from an evangelist.

BURNETT: It's quite expensive. It has a large carbon footprint. And there's real concerns about impact on marine life.

POTTER: For Burnett, that last part is awkward. Not only are his parents marine biologists, but his grandfather David Packard's Silicon Valley fortune laid the foundation for the Monterey Bay Aquarium. Burnett himself used to work on climate rules for the EPA.

BURNETT: So here I am, advocating a project that has a large carbon footprint and, if not done correctly, can hurt the oceans.

POTTER: Burnett says his hands are tied. A cease-and-desist order to protect the Carmel River came with a deadline, forcing the surrounding towns to look for water somewhere else.

BURNETT: For us, desal really was the last option to consider. But we got to that point.

POTTER: There are several environmental critiques of desal, from the fish eggs that facilities can kill when they suck water in to what happens when they dump all the leftover salt back out to sea. Engineering workarounds to these problems are not cheap, leading some to argue desal is more trouble than it's worth.

SCOTT MALONI: The bigger concern is what if there are no alternatives?

POTTER: Scott Maloni is vice president of Poseidon Water, the company that's building the huge desal plant in Southern California. They're hoping to add another like it outside LA. Maloni says right now, the state has other options, but...

MALONI: But I think the larger concern is climate change and what happens 10 years and 20 years from now. Can we really count on the Colorado River or Northern California to continue to supply the vast majority of the state's population with water?

POTTER: Environmentalist Susan Jordan, with the California Coastal Protection Network, says this is the real tension over desal. Will it be used to hedge against the prospect of a mega-drought in coming decades or just enable more growth?

JORDAN: If you're going to do something like desal, you want to make sure that you're doing everything you can in terms of conservation, water recycling, water reuse. And you don't want to fuel unsustainable development that just perpetuates your problem.

POTTER: For now, Jordan would rather see Californians take smaller steps. It takes years to design and build a desalination plant and get all the necessary permits. The whole process might just take longer to get through than the drought itself. For NPR News, I'm Daniel Potter. Transcript provided by NPR, Copyright NPR. 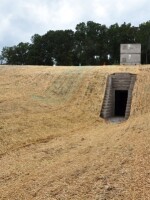