This past summer on Cyprus Avenue, Bill Shapiro put the spotlight on the documentary film 20 Feet from Stardom, a celebration of outstanding musicians who rarely receive recognition:  the back-up singers.  Included on the show were portions of the film's soundtrack, plus other recordings by the artists featured in the film.  Since then, 20 Feet from Stardom has been nominated for an Oscar, so we bring you a special encore of that show.

"Nobody's Fault but Mine" -- Merry Clayton

"I Idolize You" -- Ike and Tina Turner

"Sure on This Shining Night" -- Lisa Fischer 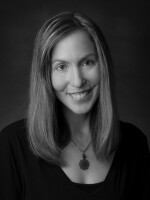 Laurie Arbore
When Laurie was a little kid in school, the only thing that got her in trouble was talking and giggling in class with her friends. Fast-forward to the present day... Imagine her joy, talking with her listener friends every day on KCUR 89.3 -- and not getting in trouble for it! Laurie started her broadcasting career in classical radio and has since worked in a variety of formats. She has enjoyed interviewing such celebrities as Ron Howard, Will Farrell, Gwyneth Paltrow, Carrie Underwood and many others. But as a self-proclaimed "Sci-Fi nerd," she counts Mark Hamill and Jonathan Frakes among the favorite interviews she’s done. Laurie has twice won First Place honors from the Missouri Broadcasters Association for co-voicing the winning radio spots, and was the opera-singing grocery clerk in an OMNI Award-winning TV campaign for Lyric Opera of Kansas City. She also has a performing arts background, having sung with Lyric Opera of Kansas City, Musical Theater Heritage, jazz pianist Wayne Hawkins, Dickens Carolers; and for sports organizations, including the Kansas City Royals. You may have seen Laurie as a Guest Co-Host on Kansas City Public Television, where she has volunteered for a number of years. Laurie plays the piano, makes jewelry, and enjoys gardening, road-trips and movies. (If you happen to be with her at just the right moment, you might hear some voices from "The Wizard of Oz!")
See stories by Laurie Arbore
Latest Stories
Hey, thanks for reading.
KCUR serves the Kansas City region with essential news and information.
Your donation today keeps local journalism strong.
Donate Now