As authorities move forward with investigations into the attack, Brazilians around the world have been left to reckon with the political and social divides within their country.

Angelique Staggs, a member of the Brazilian community living in Kansas City, says she feels ashamed of the rioters.

“We're all in awe and stunned with the news of what happened,” Staggs said. “We are often asked this question: ‘So what do you think?’ and ‘What happened?’ Overall there’s just a sense of embarrassment, really.”

Many of Bolsonaro’s supporters have called on the Brazilian military to step in to remove Brazil’s newly elected president, Lula da Silva.

Staggs says such demands have greatly worried her older relatives, many of whom lived through the military coup d'état that took place in Brazil during the 1960’s.

“I believe most of the Brazilian people do not remember those days,” said Staggs. “To set aside the democratic system that we are right now, one of the largest in the world, and call for military intervention is to take a step back in time.”

Many have likened the attack to the Jan. 6, 2021, insurrection at the U.S. Capitol. In both cases, supporters of a conservative incumbent president stormed government buildings in an attempt to prevent the transfer of power to more progressive successor, based on false accusations that the election was fraudulent.

Rebecca Best, a political science professor at UMKC, says that many of Bolsonaro’s action during the end of his term mirror those of former President Donald Trump.

“During the Trump administration, he really aligned himself with Trump,” said Best. “I think he even referred to himself as the Trump of the tropics. I think he was pulling directly from that playbook.”

Staggs says many within her community feel that the actions of Trump and his supporters influenced what happened in Brazil.

“Yes, by all means, it was a model. It was a template,” Stags said. “I believe if there was no Donald Trump, there would not be a Bolsonaro in Brazil.” 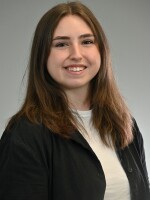 Hannah Cole
Hannah Cole is an intern with KCUR's Up To Date.
See stories by Hannah Cole