Question: How many bars and restaurants host weekly trivia competitions across the Kansas City metro? KCUR did some digging to bring you the answer.

For some, trivia night is a competition of the minds, a weekly hobby that tests your knowledge and skills under pressure. For others, it’s a good venue for a date night or an excuse to get a group of friends together.

Mostly hosted at local breweries and bars, trivia nights typically cost between $5-10 a person, with the funds often going to the winning team at the end. Others — including trivia nights hosted by Geeks Who Drink — are free to play.

But as any good pub trivia host will remind you, ordering food and drinks while you’re playing (and tipping your server and bartender!) is the best way to support the game and the business hosting it.

Whether you’re a pop quiz whiz looking for your next challenge or a novice in search of a fun night out, here’s a list of the many places you can find weekly trivia nights in Kansas City.

Make the worst day of the week a little easier with some drinks at Monday night trivia.

Put your music knowledge to the test at Bier Station’s Monday night music trivia at 7-9 p.m. It’s $5 per player and newcomers play for free, with cash prizes going to the first and second place winners. Check Bier Station’s Facebook page for category previews each week.

Crane Brewing Company in Raytown, Missouri, hosts trivia every Monday night with KC Trivia Geeks, a local trivia organizer and self-proclaimed “third-best pub trivia in Kansas City.” It’s $5 to play with teams up to eight players and runs from 7-9 p.m.

Tuesday is easily the biggest night for trivia in Kansas City. In almost every neighborhood and suburb, you can find a trivia event that suits your tastes. Here’s a sampling of some of the most popular Tuesday night trivia around Kansas City.

Regardless of your trivia prowess, you’re guaranteed to have fun at All-Star Trivia Tuesday nights at Hamburger Mary’s. Voted as the “Best Trivia in KC in 2021” by The Pitch, this game is free to play with prizes at the end and runs from 7-9 p.m. Learn more and reserve your spot in advance.

With an impressive number of participants most weeks, Cinder Block Brewery in North Kansas City was voted as runner-up in The Pitch’s Best of KC 2021. Run by Geeks Who Drink, Tuesday night trivia at Cinder Block Brewery is free to play with teams of up to six players and runs from 7-9 p.m.

Rochester Brewing & Roasting Company in the Crossroads is another Kansas City brewery and coffee house featuring weekly Geeks Who Drink trivia. Whether you’re craving a coffee or a beer to go with your trivia, Rochester has all three on Tuesdays from 7-9 p.m.

Intelligence Check Trivia is another popular trivia organizer in Kansas City. With eight rounds of open format trivia — and occasional theme nights — you can compete to win prizes at John's Big Deck in downtown Kansas City, Tuesdays from 7-9 p.m.

Barley’s Kitchen and Tap in Overland Park also hosts trivia with help from Geeks Who Drink every Tuesday from 7-9 p.m. It’s free to play with teams of up to six players.

Brew Lab in Overland Park hosts a free trivia night with KC Pop Quiz on Tuesdays from 7-9 p.m. Take advantage of $2 tacos paired with a pint of craft beer.

As Kansas City’s “first board game pub and geek bar,” it’s no surprise that Pawn and Pint hosts a popular weekly trivia event on Wednesdays from 7-9 p.m. With eight rounds of trivia from Intelligence Check Trivia, you can “have a drink while you think” after paying a $5 cover.

Also located on 39th Street in Kansas City is Hi-Dive Lounge, a low-key neighborhood bar that hosts a popular Geeks Who Drink trivia night on Wednesdays from 7-9 p.m.

As recommended by KCUR's Dan Margolies, Roland Reschke hosts Trivia Blitz at Flying Horse Taproom most Wednesdays starting at 7 p.m. Be sure to check the Trivia Blitz Facebook page for confirmation and category clues and to reserve your team's spot in advance. It costs $5 to play and teams larger than four participants are encouraged to show up early.

Brewbakers, a bar and grill in Belton, Missouri, hosts a weekly Wednesday night competition with help from KC Trivia Geeks. It costs $5 to play with teams of up to eight players and runs from 8-10 p.m.

For the next three weeks, you can put all those hours binge-watching The Office to use with Office Trivia at Vignettes, home to an Office-themed pop-up experience in North Kansas City, Missouri. Spots fill up quickly and the fun ends March 20, so keep an eye on Vignette's Facebook for more information on trivia night and tickets.

Intelligence Check Trivia makes a weekly stop at Westport Ale House on Thursdays from 7-9 p.m. Enjoy discounted appetizers and no cover charge, with prizes for the top three winning teams.

Test your knowledge at the Piano Room in Waldo Thursdays from 7:30-9:30 p.m. Check the Piano Room’s Facebook for a preview of categories prior to each week’s event.

Bricks Pub & Grub in downtown Lee’s Summit hosts trivia every Thursday from 8-10 p.m. with the help of KC Trivia Geeks. This weekly quiz costs $5 to play with teams of up to eight players.

Hosting weeknight trivia is a popular (and effective) tactic for bar and brewery owners looking to increase business on slower evenings — which is why there are fewer options on Fridays and weekends. But that doesn’t mean you won’t find trivia happening somewhere in KC.

Misc., a taproom and event space in North Kansas City, hosts weekly trivia on Fridays from 7-9 p.m. Some nights are general knowledge while others are themed — including the upcoming Parks and Rec trivia on Friday, Feb. 25. Tickets are $5 per person with teams of at least four people and a maximum of eight players. Grab a group of friends or go alone and they’ll team you up with fellow trivia fans — which can be especially fun on theme nights!

Intelligence Check Trivia also makes a weekend stop at ReRoll Tavern in North Kansas City (home to The Office-themed pop-up bar mentioned above). Test your knowledge at ReRoll on Sundays at 2 p.m., where “every great adventure begins in a tavern.” 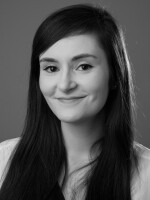 Grace Lotz
Grace Lotz is a digital producer for KCUR and the Kansas News Service. You can reach her at grace@kcur.org.
See stories by Grace Lotz
Hungry For MO returns!
KCUR's podcast Hungry For MO is back with more stories about Missouri’s iconic foods, from barbecue to pizza and beyond.
Subscribe now
Latest Stories
Support news that matters in Kansas City
KCUR serves the Kansas City region with breaking news and powerful storytelling.
Your donation helps make nonprofit journalism available for everyone.
Donate Now
Related Content